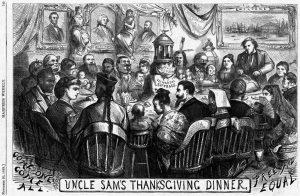 CARTOON by Thomas Nast, UNCLE SAM’S THANKSGIVING DINNER: 1869. Nast, a Republican, became a staunch supporter of Democrat Grover Cleveland during the 1884 election. Nast is credited with creating the iconic images of the donkey and the elephant that would come to represent the two major parties.

READ MORE: Notice at the top, center of the cartoon, the small banner draped over the portrait of President Ulysess S. Grant with the words, “15th Amendment,” and in the table’s centerpiece, “Self Governance” and “Universal Suffrage.”  This scene was the artist’s, and the magazine’s, endorsement of the 15th amendment which had been undergoing vigorous debate, with removals and revisions in Congress throughout the year. It would finally pass the following February of 1870, during Grant’s presidency. https://constitutioncenter.org/interactive-constitution/amendment/amendment-xv   In 1884, Despite Thomas Nast’s party affiliation as a Republican, he found he could not conscientiously vote for, or support, Cleveland’s opponent, James Blaine, who Nast saw as a thoroughly corrupt leader. Throughout the 1884 election year Nast drew scathing cartoons of the Republican candidate portrayed as a thief and conversely, published glowing cartoons portraying Grover Cleveland as a heroic non-partisan reformer. In the words of the artist’s grandson, Thomas Nast St. Hill, “it was generally conceded that Nast’s support won Cleveland the small margin by which he was elected. In this his last national political campaign, Nast had, in fact, ‘made a president.'”