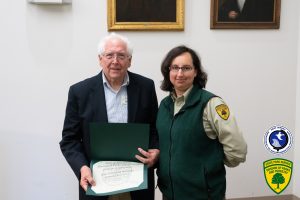 The Grover Cleveland Birthplace Memorial Association (GCBMA) was granted the OUTSTANDING SERVICE AWARD by the New Jersey Governor’s Office on Volunteerism and the Governor’s Advisory Council on Volunteerism “for your efforts and talents in sustaining the communities of New Jersey”.  The award ceremony, part of the Department of the Environment’s April 29th recognition day event at Batsto Historic Village, a New Jersey historic site in Burlington County, was to recognize the achievements of the friends organizations that support the state parks and historic sites.  Tahesha Way, the Secretary of state noted “that everyone can be great…..because anybody can serve.” citing Dr. Martin Luther Kings, Jr.’s observation on volunteering for the public good.
Also at the same service, the Division of Parks and Forestry of the DEP awarded a certificate of Appreciation to the Grover Cleveland Birthplace Memorial Association signed by Olivia Glenn the Director of the Division.  The award was in response to a nomination from Melissa Castellon the Hopatcong State Park Supervisor.  Superintendent Castellon noted in her nomination that the Grover Cleveland Birthplace Memorial Association has staged large historical events such as the re-enactment of the Inauguration of 1893 with the Montclair Symphony Orchestra, active community events such as the annual Ice Cream Socials on July 4th, sponsored scholarship on Grover Cleveland’s life and times in New Jersey, and supports the work of the State in making the visitors welcome and encouraged.  The GCBMA also has raised large funds to help build a new Visitor Center incorporating the Carriage House, part of the historic structures at the site.
The  GCBMA is a not for profit Officially Recognized Friends Organization for the site; indeed, the group was formed in 1913, purchased and preserved the birthplace, and turned it over to the state for the public’s use in 1933, making it one of the oldest friends organizations in the state.  The birthplace is located at 207 Bloomfield Avenue, Caldwell, NJ open Wed. thru Sat. 10am – 4pm Closed 12pm -1pm for lunch and Sunday 1pm – 4pm.  School and group tours are also available, you can call the birthplace at (973) 226-0001, and free parking is available.    Also Follow/ like us on facebook  –https://www.facebook.com/ClevelandBirthplaceAssociation/ .